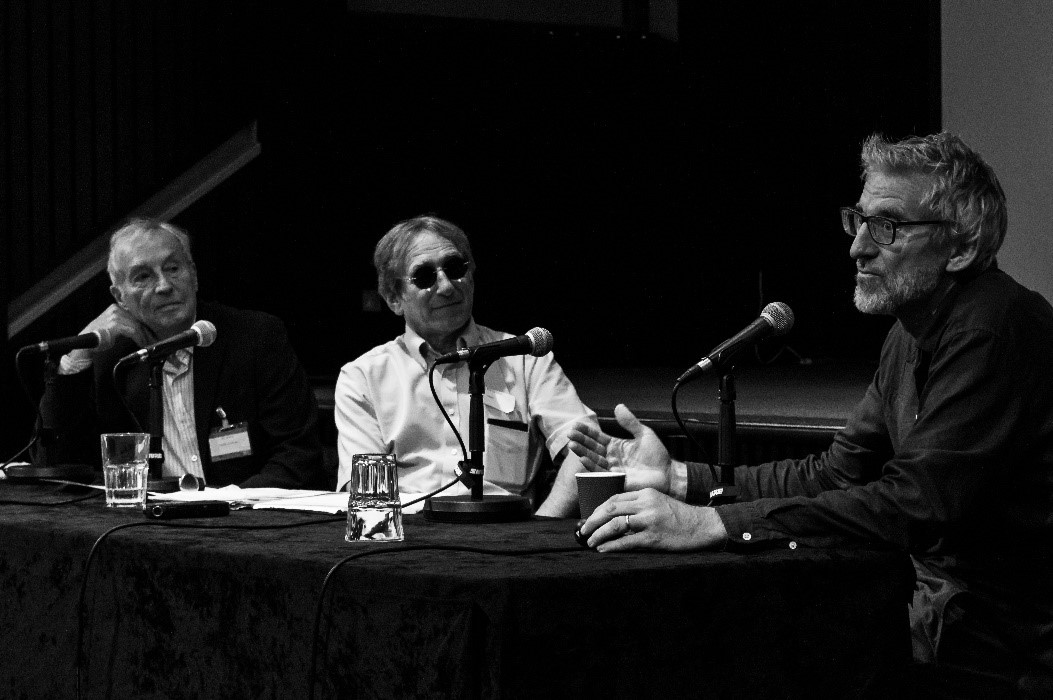 This year’s autumn conference marked the 30th anniversary of LifeLines – in some ways, a bittersweet occasion since, in the words of Jan Arriens as he opened the conference, ‘We would like nothing more than to go out of business because the death penalty came to an end – although we would still continue, as the friendships we have now would be sustained.’

Client to fill in

And it was these friendships that were at the heart of the conference, which was a very special opportunity to look back over 30 years of correspondence and to think about those people, on both sides of the Atlantic, who have been an important part of the journey so far. Among these is Elisabeth Calvert, who has been a wonderful moral and practical support since Jan founded LifeLines back in 1988. Though sadly unable to be in London for health reasons, Elisabeth was able to join the conference through the wonder of WhatsApp, and sent her love and warm wishes to us all from afar.

With typical irreverence and humour, Clive took us on a trip down memory lane, to talk about three of the men without whom there would be no LifeLines: Leo Edwards, Sam Johnson and Edward Earl Johnson.

Leo had been sentenced to death by an all-white jury, and once told Clive, who was representing him on his final appeal, ‘When I saw that sea of white faces, I knew I was dead.’ Despite the best efforts of both Clive and his predecessor Ken Rose to prove that black jurors had been deliberately excluded by a racist prosecutor, Leo lost his appeals and was sadly executed two years after the death of Edward Earl Johnson.

On another trial Clive worked on in Alabama, the prosecutor struck seventeen black people from the jury in a row. When Clive brought this to the judge’s attention, by pointing out that the mathematical probability of this happening by accident was infinitesimal, the judge responded, ‘You’re wrong. The probability of the prosecutor doing this is 1 in 1; he always does.’ To his

credit, however, the judge went on to disallow several racist strikes, and Clive’s client became the first black person ever to be acquitted in that county.

Sam Johnson, who Clive describes as ‘an intriguing person’, was convicted of the murder of a white police officer in Mississippi. It had been proven that a black person found guilty of killing a white person is 44 times more likely to get the death penalty than the other way around, but this alone wasn’t considered good enough evidence of racism in Sam’s case. Clive went and spoke to the jurors from his original trial, which had included ten white people and two black people. Since they all assumed Clive was from the BBC, most of them were more than happy to talk to him, and he learned from one woman that when the two black jurors voted against the death penalty, she had threatened to send her husband – a member of the Ku Klux Klan – round to burn their house down. When Clive then tried to speak to the two black jurors, one of them was still so terrified that at first he wouldn’t even admit he’d been on the jury.

At Sam’s re-trial, Clive and his co-counsel managed to secure a jury that consisted of eight white people and four black people, and although all but one of the white jurors still voted to sentence Sam to death, they were unable to reach a unanimous decision, and he avoided the death penalty. This was a great result, but Clive still believes Sam was innocent of the crime for which he was convicted, and that another man, Anthony Fields, actually killed the police officer. Fields – like many perpetrators in cases that involve more than one defendant – cut a deal with the authorities, which allowed him not only to serve a reduced sentence but also to gain certain privileges, all of which were brought to light by Clive at Sam’s re-trial: among them the right to ‘conjugal visits’ from prostitutes, and the freedom to leave the prison. It’s shocking to learn that a prosecutor can offer anything to get a prisoner to testify against someone else, but if a defence attorney does the same thing, they’ll go to prison for perverting the course of justice. This is just one example of the huge imbalance of power in death penalty cases.

Clive became involved in Edward Earl Johnson’s case three weeks before his execution. At the time he was, by his own admission, ‘young and arrogant’, and he never thought he would lose the case. He now believes that if he had known then what he knows now, Edward would be alive and free today. After the BBC crew turned off the cameras, Clive was allowed into the gas chamber with Edward, who whispered to him, ‘Is there something you know that I don’t?’ Clive later worked out what he meant: he believed that because the BBC were filming, at some point someone would call ‘cut’. He only realised at the very last moment that it wasn’t going to happen, and while that was horrendous, Clive is glad for his sake that Edward was able to have that hope all the way through.

Clive’s inspiration for the work he does comes from his mum, who taught him that when we’re really privileged, our job is to help those who aren’t – to look for the people who are most hated and stand between them and those doing the hating. Reflecting on 30 years of LifeLines, Clive believes that what we do is one of the most heartwarming things he’s been involved in during his ‘long and storied career’. The death penalty and prison are about dehumanising people, and what LifeLines does is the opposite of that. He ended his talk with a challenge: what are we going to do for the next 30 years…?

Rick Halperin, a tireless campaigner against the death penalty, began by also emphasising the importance of what LifeLiners do, calling it ‘basic human decency’. Although there are many efforts to abolish the death penalty in the USA, writing to the men and women on death row is not something that most Americans are willing to do. This, Rick believes, is largely due to the overwhelming anger of a nation enslaved by violence and fear. That anger is stoked by politicians on both sides – Democrat and Republican – for their own gain, and the inevitable result is that the least privileged in society suffer.

Without LifeLines, Rick believes the abolitionist movement would not be where it is today – though the ‘endurance contest’ that is the struggle to end the death penalty goes on, by writing we make death row prisoners visible to the outside world, and in doing so we make it harder for states to persist in quietly killing people. LifeLines and its members, he said, ‘are a moral conscience to my country from 5,000 miles away’.

Like Clive, Rick shared with us some of the absurdities of the death penalty, which is the longest running institution in U.S. history – ‘as routine as apple pie’. The day capital punishment was reinstated in 1976 was Rick’s birthday, and for many years he couldn’t bring himself to celebrate what he still sees as a day of shame for his country. To date, 1,483 people have been executed, and although nationally the number of people being sentenced to death is decreasing, that’s small consolation to the men and women already on the row.

It was decided about ten years ago that the abolitionist movement in the U.S. would approach abolition incrementally, and this approach has been successful, if frustratingly slow.

Jan Arriens and Rick Halperin
Two victories to date have been ending the execution of juvenile offenders and of prisoners who are deemed to be ‘mentally retarded’ (now referred to as ‘intellectually disabled’). When all juveniles were removed from death rows across the nation in 2005, 89 young men were saved, 27 of them in Texas, where they were sentenced to a mandatory 40 years in prison; it’s possible that we may therefore live to see these men released in the future. Prisoners with intellectual disabilities were taken off all death rows except Texas in 2002 – sadly, because Texas doesn’t measure IQ using a number like all other states, many people remain on the row there, with no help or treatment.

2008 saw executions across the U.S. halted over a challenge to the constitutionality of the lethal injection, but after it was found not to be cruel and unusual punishment, they re-started in 2009. Mercifully, companies across Europe have now stopped selling their drugs to the States for use on death rows, although as we know this hasn’t stopped executions – it just means ‘American ingenuity’ is called for to find a more creative way to proceed.

Rick believes this unhappy picture speaks to the ‘pathetic desperation and the lust to kill’ of the USA, exemplified politically by the lack of leadership and the appointment of pro-death penalty Supreme Court judges. In 1993, the case of Herrera v Collins ended with the astonishing decision that ‘innocence is no barrier to execution’, meaning that if a jury passes a guilty verdict and there’s no DNA evidence, even someone who is factually innocent can be executed. And Rick knows that the USA has killed innocent people – one example is a man he knew, Frank McFarland. After Frank died, a friend of Rick’s who worked for the FBI examined the evidence in his case and was astounded that he had even been convicted, let alone executed.

Asked what advice he would give to someone preparing for a career in death penalty work, Rick’s answer was simple: ‘Be prepared.’ To do this work takes patience and controlled rage, but it’s the most important work there is. In his opinion, ‘this is not a human rights issue – it is the human rights issue, around which all others revolve.’ America can’t even begin to get better on human rights until it stops killing people in the name of the law, but Rick believes that in spite of everything, we will overcome the death penalty in our lifetimes. We are on the side of moral right, and one day we’ll be back together celebrating because the death penalty is finally a thing of the past. He said he would go back home buoyed and encouraged by our love and humanity, and in return he left us with a single task: don’t lose faith.

The LifeLines AGM will be held during the virtual conference on 9th October, 2021. Further connection details and arrangements will go out in the conference booking form.

Have a chance to hear about Lifelines and how their letter writing helps comfort US prisoners on deathrow.

The LifeLines AGM will be held during the virtual conference on October 09, 2021. Further connection details and arrangements will go out in the conference booking form.

Tickets and more details to be announced soon.